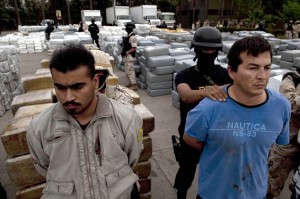 Do you believe prayer makes a difference? Monday morning, between 4-6 am, the prayer room intercessory missionaries were on their feet interceding for Mexico. We were crying out to God for justice in places like Juarez where drug cartel paralyze Mexican citizens with fear. In some areas of Mexico, the fishing industry has declined because drugs and crime dominate the atmosphere. You can actually watch us as we cry out for specific demands such as drug busts and the hearts of drug lords to turn to God. Click here and watch the Monday, October 18, 4 to 6 am archive

At this same exact time, Reuters reports the largest drug bust in Mexico’s history.  Read this article about Mexico’s largest drug bust ever happening just hours after a room of Christians prayed to God with these very requests.  Prayer makes a difference. Stranger still, drug lords did the unthinkable at the bust’s outset: they took the police to where the rest of the drugs were being stored in warehouses off site. Did the fear of the Lord fall on these men? Were their heart’s repentant to a point to negate the fear of inevitable repercussions from the cartel from this action? I don’t know, but it’s certainly strange. Prayer makes a difference.

The amazing fact in all this is that our prayers matter. Prayer makes a difference! We are partnering with God, the creator of heaven and earth. He moves at the sound of our voice, and moves and shifts things in the natural ( and supernatural). Your prayers are making a difference. We don’t always see the fruit of it in such an obvious way as this. But no matter, He is acting on our behalf. Keep hoping, believing, and being faithful in prayer. He is the God Who answers. And through prayer He makes a difference.