Learning Contentment in the Changing Seasons

Outside there’s the sound of coyotes.  I imagine them all chasing after some creature, working together frantically in the night as a team, letting out howls of excitement as they run.  Hope it’s not one of our baby cows, I think.  I would get up to look, but I’m nursing Sofia, my 8 month old, in the dark.  I’m in the “nursery”. It’s really a living room that we converted to a nursery making a wall out of a curtain. Here I am in Oklahoma, in the dark of a make-shift nursery, breastfeeding a baby and thinking about coyotes and cows.  This wasn’t where I expected to be. But I’m here and I’m Learning Contentment in the Changing Seasons

Learning Contentment in the Changing Seasons: The Season Before

Before, I was at IHOP-KC a mission base and church in Kansas City often called a cult because of it’s tight-knit community.  My day was scheduled up to the minute including 6 hours a day for prayer.  I lived with a group of women on fire for God always ready to pray, talk about the Word, worship, or even dance.  Always. Any time. Day and Night I was connected to fellowship.  Day and night I was provoked by a group of men and women-runners after God.

But in the night hours, I cried inside myself giving my deepest prayers to God. Two things: To be restored to my father (we were estranged at the time) and to meet my husband.  This second prayer was even stronger in my heart than the first.  I prayed for many things in that season, but none gripped my heart with the pain of longing like this one.  I longed for the next season not realizing, at times taking for granted the bliss of the season I was in. 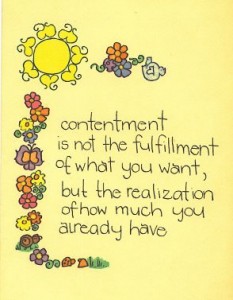 The next season,  I had a smaller group of believers in the little Texas town of Abilene. These girls: Caitlin, Sue, Cara…they kept me sane. My heart was aching for two things: my friends in KC and my husband that I hadn’t met. Then I met him! He was so amazing.  Not exactly what I had imagined but he was the puzzle piece that matched mine. His strengths helped my weaknesses, his light highlighted my dark areas, his bumps fit my grooves.

Speaking of that, the baby came soon after marriage.  Sooner than we expected.  So, the living arrangement that we thought would be temporary is still our current reside.  The financial strain and not having our own  home has been hard. At times, I’ve asked God “why?” I don’t understand why we can’t meet financial responsibilities. As Christians, it seems God would want us to?

Over a year of living in Oklahoma, and I still don’t have one Oklahoma friend. I call my friends in KC, Abilene, Hoptown and my heart-Bekah from time to time…but I don’t have present, tangible fellowship. A lot of the reason is probably because of starting marriage and a family, but it still feels like such a void especially after my background. I find myself often watching the services of IHOP-KC and the prayer room wondering why God had me leave KC and if I’ll ever go back.

Learning Contentment in the Changing Seasons: The Next Season

I imagine the next season to be a season where we will have a home and be able to breathe a little easier financially.  It will be a season where I can balance married life and being a mom along with pursuing godly fellowhip with men and women at my church. And I imagine it will be missing something, perceptively.  My grandmother said the “broke times” as a couple were the years that you would always remember as the best.  That’s hard for me to imagine now, but I know that it’s probably true.  I try to think of those words now during the hard times.  I try to laugh and kiss Paul a little harder, hold Sofia a little tighter. One day, I may long for these moments.  When I get what I thought I wanted.

I think in all this reflection that I am “learning contentment” as Paul wrote.

Not that I am speaking of being in need, for I have learned in whatever situation I am to be content. Ph 4:11

God is teaching me many things in this season that I have never learned before. This is just one of them. I’m thankful. I’m thankful  for this season.  God help me in learning contentment.