Feeling Defeated & Getting Back Up: In the Ring… 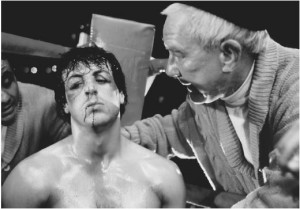 I had a picture today of me in a boxing ring.  My face was bruised, swolen, bloody, and contorted. My limbs and body were almost lifeless from being beaten. It was a scene like Rocky at the point of near defeat.  I was taking blow after blow, getting defeated.  After each hit, I would fall, but I would use all the strength I could muster to get up again.  Again and again… rising only to take another blow.

It’s true: I have found myself in a season where weaknesses confront me and feel as David did when he said “all my iniquities have overtaken me.” I feel so defeated.  It’s humiliating to lose time & time again in the fight to obey… to walk in holiness.  And to be hit and taken down by the same struggles that I had almost 10 years ago. It’s hard not to, when feeling defeated,  just give up.

Amidst this defeated feeling, I was reminded of the prophetic song by Misty Edwards. Some of the lyrics are:

I began this good work, and I will be faithful to complete it….

I knew what I was getting into when I called you, when I chose you…when I said your name.  Still I said it just the same.  I know your frame.  I know that you are dust. I am not shocked by your struggle…. I am not disgusted or ashamed of  you.  I see strength in you when all that you can see inside of you is your own weakness.  But I know where this is going.  I see the end from the beginning.  And you’ve only just begun.

So few ever fight the good fight.  At least your fighting, even though you think you’re losing.  This is all I ask: Don’t give up.  Don’t give in. If you don’t quit, you win. You’ll win.

So when you are feeling defeated.  Get back up!  Use some of these verses to help you get past that defeated feeling and press into the upward calling of Christ.

For a righteous man may fall seven times And rise again, Prov 24:16

He will deliver you from six troubles; in seven no evil shall touch you.Job 5:19 (ESV)

Many are the afflictions of the righteous, but the LORD delivers him out of them all. Ps 34:19 ESV

Rejoice not against me, O my enemy: when I fall, I shall arise; when I sit in darkness, the LORD shall be a light to me. Micah 7:8
We are hunted down, but never abandoned by God. We get knocked down, but we are not destroyed. 2 Cor 4:9 (NLT)

Count it all joy…when you fall into various trials… James 1:3

Here is the video to Misty’s song…