Selfie was named as the word of 2013 and it’s frequency of use has increased by 17,000%. Of course, I can’t think of selfies without thinking of C.S. Lewis and Perelandra. 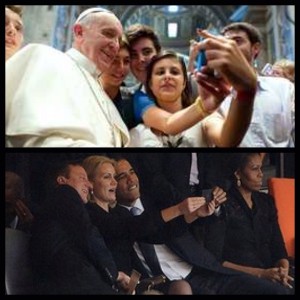 This is my second post on the book Perelandra, a science fiction work by C.S. Lewis.  If you missed the first one it was on Good Versus Best.

The selfie has become very common in our society.  Everyone from the pope to the president.  And everywhere-from restaurants to funerals.  If we took a step back, we might realize how outrageous this practice really is, but it has become an accepted norm.  Self-gazing.

This gazing on self was the topic in part of Lewis’ book.  It struck a sensitive chord as I am also fond of selfies.  Well dang it! There’s never anyone around to photograph my most gorgeous moments!  Anyway, in this chapter the Enemy (also referred to as Un-man) is trying different strategies to cause the innocent “Lady” to fall.  It’s basically giving a glimpse into the second Eden where Satan is using strategies to deceive Eve into sin. At this point the Enemy has been filling her head with stories of heroines and also made her a coat of beautiful feathers (from birds he had cruelly slaughtered).  Ransom (whom the lady also refers to as Piebald) is the main character who is sent to try to deflect the enemy’s many schemes and to keep this Fall from occurring. This chapter escalates with a mirror as the enemy gives the Lady her first glimpse at her own appearance.

“But if you do not look you will never know how beautiful you are.”

It comes into my mind, Stranger,” she answered, “that a fruit does not eat itself, and a man cannt be together with himself.”

A fruit cannot do that because it is only a fruit,”said the Un-man.  “But we can do it.  We call this thing a mirror.  A man can love himself, and be together with himself.  That is what it means to be a man or a woman–to walk alongside oneself as if one were a second person and to delight in one’s own beauty.  Mirrors were made to teach this art.”

“If you try it and it is not good,”said Ransom, “how do you know whether you will be able to stop doing it?”

“I am walking alongside myself already,”said the Lady. “But I do not yet know what I look like. If I have become two I had better know what the other is.  As for you, Piebald, one look will show me this woman’s face and why should I look more than once?”

She took the mirror, timidly but firmly, from the Un-man and looked into it in silence for the better part of a minute.  Then she let it sink and stood holding it at her side…

(The Un-man speaking)I would give you this mirror to keep…But you have reminded me there can be no gifts, no keeping, no foresight while you live as you do–from day to day, like the beasts.”

But the Lady did not appear to be listening to him.  She stood like one almost dazed with the richness of a day-dream.  She did not look in the least like a woman who is thinking about a new dress.  The expression of her face was noble. It was a great deal too noble.  Greatness, tragedy, high sentiment–these were obviously what occupied her thoughts.  Ransom perceived that the affair of the robes and the mirror had been only superficially concerned with what is commonly called female vanity.  The image of her beautiful body had been offered to her only as a means to awake the far more perilous image of her great soul.  The external and, as it were, dramatic conception of the self was the enemy’s true aim.  He was making her mind a theatre in which that phantom self should hold the stage.  He had already written the play.  (Perelandra, Lewis, pp137-139)

We have fallen in love with ourselves, with our own image, our own beauty. And worse, we have become the center of everything.  Self is the center of the great saga of life.  But this is so untrue.  In fact, we are barely supporting characters.  Jesus is the lead actor in this play that has spanned thousands of years.  Our existence is only here to support his own glory.

And I believe as long as we are at center, our souls and lives will feel misaligned, maligned with an innate sense that something is “off”. Just as physically When something is out of balance, we feel sick; so there are symptoms of sickness of soul. This sickness ails us each individually and is obviously affecting our modern society. And the root of our disease is self-gazing, self-focus. Maybe we should remove our mirrors & cameras.

There was nothing beautiful or majestic about his appearance,
nothing to attract us to him. Isaiah 53:2 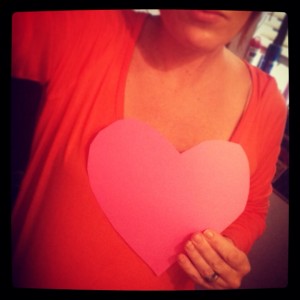 How little does outward beauty matter to God? How much could it matter if His own son, God in flesh had zero beauty.  Man looks at the outward appearance but God looks at the heart. What if we took a selfie of our hearts, our inner person?  Would we want to send that out to the world?

Don’t be concerned about the outward beauty…You should clothe yourselves instead with the beauty that comes from within, the unfading beauty of a gentle and quiet spirit, which is so precious to God. 1 Pet 3:3-4

Too many selfies.  Too much time thinking about self. Guilty.  Since reading this chapter, I haven’t stopped taking selfies, but I definitely take less and stop to think every time. Am I the star of this story (and also my own paparazzi)?  How can I put Christ at the center instead? Take my eyes off the mirror (or rear-facing camera) and back on Christ who’s beauty is beyond description.

Anyone who listens to the word but does not do what it says is like a man who looks at his face in a mirror. James 1:23